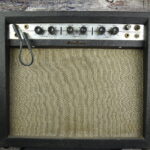 This Airline 9013 was sold through Montgomery Ward department store catalogs and is another example of an amp that was made under several brand names. This killer little amplifier, which chugs along at about 15 watts, first appeared in 1962 and was made in New Jersey by Danelectro. The president, founder, and sole owner of the company in those days was Nat Daniel, and man, the guy was just an incredible innovator who knew how to get amps and guitars into the hands of kids all over the U.S.
The 9013 was promoted in advertisements as a “Regular Amplifier” that sat in the lower price range of $70. Interestingly, the more expensive “Professional” Airline amps were made by Valco. The circuit of the 9013 is essentially identical to the Danelectro-made Silvertone 1482 amp (with the vertical control panel) sold through Sears.

To keep costs down, Danelectro used some sort of pressed paper or particleboard for the cabinet construction. Basically, these amps don’t travel very well and you definitely don’t want to spill your drink on one of them. But the benefit of these cabinets is the entire amp only weighs around 26 pounds.

The amp runs on a pair of 6V6 power tubes and the deep, pulsating tremolo goes through a 6AU6, which creates a lovely effect. This was one of the first amps I ever fell in love with, and although it doesn’t create room-shaking volume, what it does create is a fantastic overdrive that I’ve used in lieu of an effects pedal.